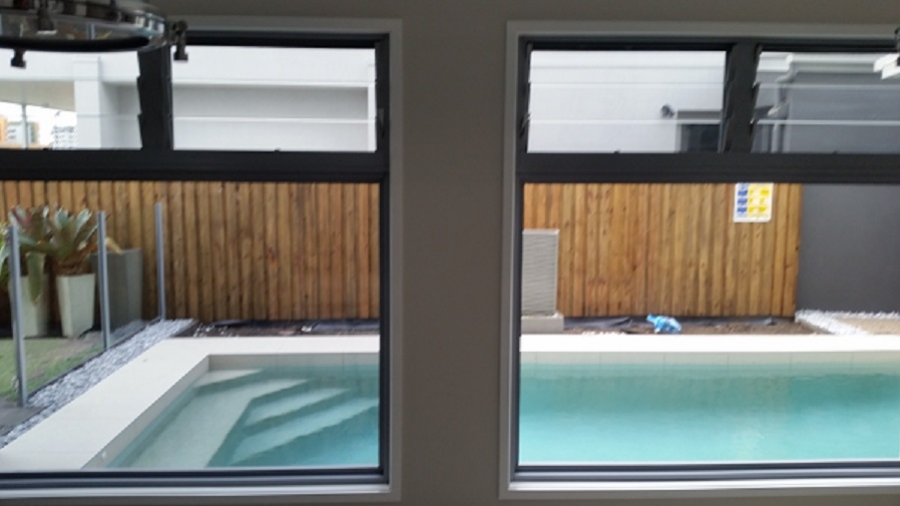 The Light and The Dark Of It

What are “clear window films”? Most of us are familiar with window tinting as an option for keeping heat out of the car or house. But when you think of tinting, just by the nature of that word “tinting”, many will picture something that is DARK.

Technology has improved over recent years allowing manufacturers to create high performance window films that are clear or nearly clear. People are amazed at how much heat these films keep out when we hold a sample up to the window. And they can barely see the difference between the film and the clear glass.

Obviously a film like this is not suitable for reducing glare, say on a TV screen or computer monitor. But they are perfect when you need to keep heat out but want to maintain high levels of natural light . 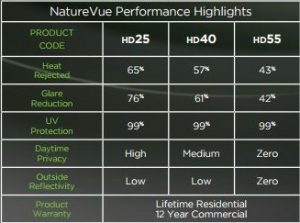 Once you get up to around 40% light transmission you are getting into the area of barely noticeable when installed on the glass. In the picture of the two windows looking out onto the pool, the left hand pane has our Nature Vue 40 installed whilst the right hand pane is still clear glass. Hard to tell the difference yet Nature Vue High Definition 40 reduces the heat coming through the glass by 57%. Cutting the heat down by over half! 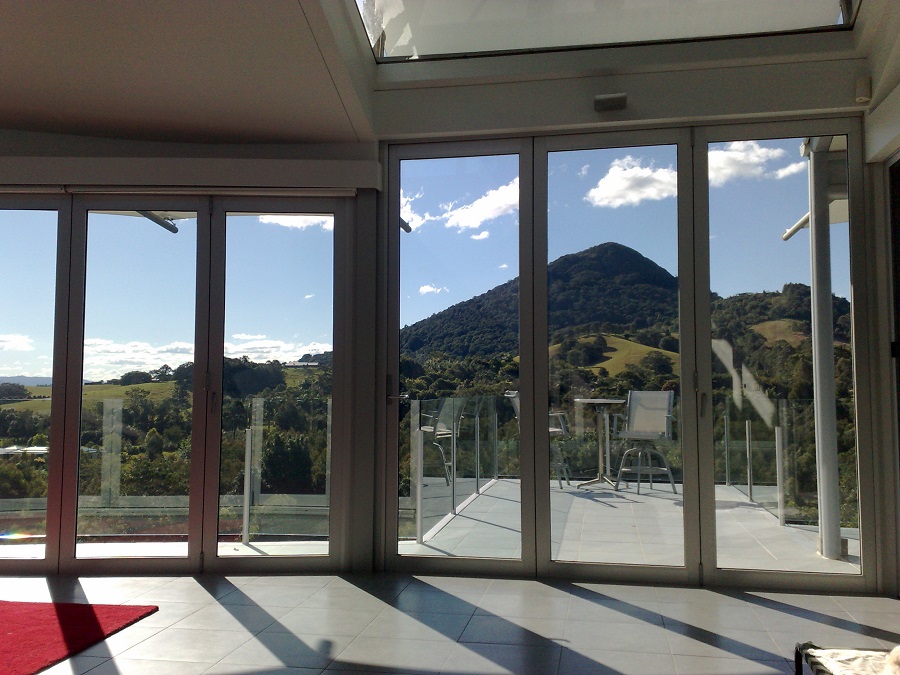 Natural light was important to the owner of this home so they chose a “barely there” film. This maintained the bright, light filled room but reduced the North Westerly sun’s heat by 50%. It also reduced fading and sun damage to upholstery, furnishings and the owners themselves by stopping 99% of the UV. It is not easy to tell, but only the three larger windows on the right were tinted at this stage. The ones on the left are as yet, untreated clear glass.

When you get to 70% light transmision we are talking films that are more or less clear. Certainly they will not make any noticeable difference to the light levels in your room. But will they keep any heat out? YES they do! Films like our Vortex IR70 and E-lite 70 are indiscernable on the glass and yet reduce the heat coming through your windows by a very respectable 51%. Most people say “How? Its almost clear”. Well it has to do with the latest technology “Nano-Crystal ceramic construction” but we will leave that for another post.

Obviously some films can keep out a whopping 83% heat but they are darker films and will effect the amount of natural light entering the room. These darker films certainly have their place and there are numerous film options at every level inbetween the dark and high performance clear films. But when you have a heat problem and would like to maintain the beautiful natural light levels in your room the choice is clear, the film is clear and the result is fantastic.

Let me help you choose the right film for your room. Get in contact and organise a free consultation to discuss the options. And dont think the same film needs to go everywhere. Each situation and room will have different requirements, so it makes sense that a different film might be required to do the best job for each of those locations.

Jim King
03:46 02 Apr 20
We are happy to give Chris a 5. He was very professional and very experienced. We were very happy with our window... tinting. Wouldnt hesitate to recommend him. Thanks Chrisread more

Simon Daniel
22:32 23 Feb 20
Chris did a fantastic Job installing both External and internal Tint Film at Pelican Waters. He is very professional,... polite and has an excellent eye for detail. I am very impressed by Chris and I will be getting another quote for my Brother this week. He is also very reasonable when it comes to price. Chris did an awesome job with the "No Gap Tint" which looks like Factory tinted glass and the finish is amazing. Keep up the great work Chris. 5 Stars +++read more

Scott Lechmere
03:43 07 Jul 19
I would recommend Enviro Tint to anyone looking at home or business tinting. Very professional and well priced. We were... very happy with everything, from the time they came out to quote and advise what would be best suited for my home, to the installation. Thanks again guys.read more

Daniel Fossey
18:16 15 Mar 19
Chris is great to deal with, He explains the whole process very well so you understand exactly what your getting and... what would be best for your particular situation, he is very competitive priced also. He did a fantastic job and I would most definitely use his services again.read more

Deborah Commins
04:03 15 Jan 19
Chris is fantastic. We have used his services twice now for our home and he has done an exceptional job each time. He... is knowledgeable and very helpful. He turns up on time, does an excellent and proficient job, and quotes fairly. I would be happy to recommend Chris and his business to anyone!read more

Bronwen Forsyth
05:06 02 Dec 18
Chris was very knowledgeable in all things tinting and helped us make the right choice for our bedrooms and living... area. Came and gave a quote same day as my initial phone call! Competitively priced and gives great advice. Every Qld home should have tinting to cool and protect furnishings from UV. What a difference it makes!read more

Adame Kerr
06:36 25 Nov 18
I had Chris come out my property in Kilcoy and fit ASWF Moonlight 15 to the East and West facing windows. Not only... were the results amazing and immediate, so was the professionalism of Chris- he was second to none. He cut all films on site and had them fitted in a very timely manner. He was happy to answer all questions before, during and after the job, without pushing to increase his sales or force any unnecessary extras onto us. I'd highly recommend him for anyone needing tinting, and will be making sure to use him for any tint jobs we need done in the future.read more

Stephen Conners
02:56 20 Nov 18
Chris did a great job on our office window tint. We now have great privacy, with the ability to see out. It's awesome! ... Chris is very professional and courteous from initial call through inspection, consultation and installation - I highly recommend Enviro Tint.read more
Next Reviews

Haley Duffill
2020-11-30T11:49:20+0000
Chris came and installed tinting to 2 of my windows today and not only is the workmanship top quality, he is a great... guy who humoured my 2 year old son showing him all his tools and books. 👌highly recommend!read more

Ben Stedman
2020-02-28T06:25:41+0000
Noticed a 4°-5° temperature drop in our bedroom prior to having our window tinted. Much appreciated and would highly... recommend! Thanks to Chris for being very informative and friendly during the while processread more

Simon Abrahams
2020-02-12T22:22:24+0000
Currently in the process of installing Ultrgard Naturevue HD15 High definition gap free Ceramic Solar tint internally... and some external tint for frosted windows in the bathrooms.Chris has so much experience. I would definitely use Chris again. He is very reasonable, great Pricing and has a good eye for detail. I had a fair few quotes and I decided to go with Chris. The clarity is sensational. 70 % Heat rejection, 99% uv reduction & 86% glare reduction. It's great in protecting the indoor furnishings. The whole house will be finished soon. It will certainly help with ducted airconditioning bills too. I wish I did this a few years ago.read more

Adam Warwick Kerr
2018-11-25T06:28:00+0000
I had Chris come out my property in Kilcoy and fit ASWF Moonlight 15 to the East and West facing windows. Not only... were the results amazing and immediate, so was the professionalism of Chris- he was second to none. He cut all films on site and had them fitted in a very timely manner. He was happy to answer all questions before, during and after the job, without pushing to increase his sales or force any unnecessary extras onto us. I'd highly recommend him for anyone needing tinting, and will be making sure to use him for any tint jobs we need done in the future. Regards Adamread more

Karla Williams
2018-11-24T05:29:32+0000
We are very happy with the service we received from Enviro Tint. Professional, friendly, price competitive and very... knowledgeable regarding which products would work best for us. Very happy customers!read more

Jennifer Clark
2017-05-15T04:42:23+0000
Today I had Chris from Endura Tint remove old scratched tinting from front windows and replaced with great quality... Endura tinting plus I also had tinting done on windows that never had tinting before, and what a difference this fantastic quality tinting has made to our house. Chris is a professional in his field and is considerate, taking off his shoes to enter your house. We will recommend this man and his company to anyone who inquires about having windows tinted. Thanks Chrisread more

Scott Lechmere
2017-03-10T03:19:45+0000
I would recommend Endura Tint to anyone looking at home or business tinting. Very professional and well priced. We were... very happy with everything, from the time they came out to quote and advise what would be best suited for my home, to the installation. Thanks again guys.read more
Next Reviews
Shopping Basket
Do NOT follow this link or you will be banned from the site!